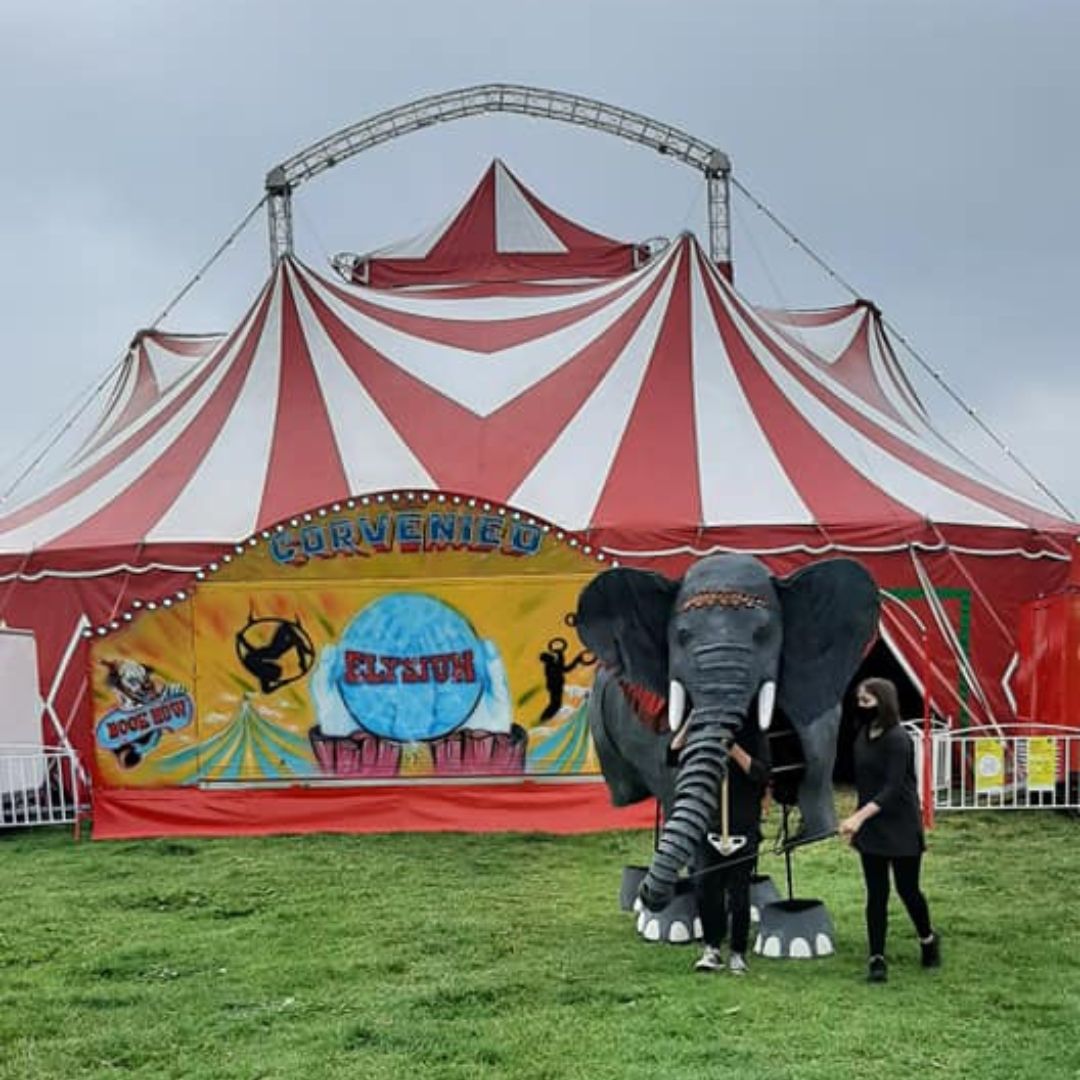 Excitement in Cloughjordan as the Circus comes to town!

Last weekend, was a magical moment in Cloughjordan when a small circus trailer appeared in the field opposite Cloughjordan GAA! It was followed by more trucks and trailers and then in an amazingly quick transformation a small but beautiful red and white stripy Bigtop filled the field! The visiting Circus Elysium, is part of the Corvienio’s Circus who are the oldest circus family in Ireland.

The excitement and anticipation generated across all the generations in our village was really wonderful to behold and it tied in beautifully with our ongoing project, ELEPHANT!  Inspired by oral history gathered by the Cloughjordan Heritage Group, Cloughjordan Circus Club has been undertaking this ambitious project for the last 18 months.

In 2020 Cloughjordan Circus Club, a youth circus project which gives young people from all over the area opportunities to learn a wide range of circus skills and explore their creativity through this exciting art from, was 10 years old! To celebrate our 10th anniversary I worked with the young people to devise an exciting show which took it’s inspiration from a piece of oral history which recalls the excitement of when the Circus came to town and the school children would be allowed into the yard as the circus Elephant and the Horse would be led down the main street to drink at the river.

From this starting point 50 young people who are part of our regular youth workshops have devised a beautiful narrative which was to be performed using circus, puppetry and narration in April 2020. We were delighted to receive support from the Arts Council Young Ensemble Scheme as well as Tipperary Arts Office for the young people to work with professional circus artists and puppeteers to create our most ambitious performance to date.

Sadly, that public performance never took place, as Covid-19 arrived in Ireland and two weeks before our performance the first Lockdown was announced.  Since then we have re-inventing our show as a film and have been working, as governmant guidelines allow, to film the various scenes including shadow puppetry, large scale puppetry and circus.

The excitement generated last week gave us all a real experience of the atmosphere and magic that are recounted in that oral history. Over summer 2021 we have been filming parts of our story against the backdrop of Cloughjordan. We dressed as “olden days” children and performed hula hoop and skipping acts in the playground of the local school, we’ve paraded our giant Elephant, Lightfoot with stiltwalkers, unicyclists and jugglers down the main street creating a similar stir to that recalled in the early 1900’s.

But the icing on the cake has definitely been to see a real traditional circus arrive in town. Brandon and Shane McCormack of Circus Elysium were really generous in their interactions with our group chatting with them after their show about life on the road with a traditional circus and the many roles each performer must undertake from setting up the tent to selling popcorn, the shows the relaxing part they said! And on the Sunday morning some we were delighted to perform and film some of our Acts prepared for the finale of our film inside their beautiful tent!

Our film “Elephant!” is almost complete and we hope to show it in the local cinema so the wider community can celebrate the talents of our local young people.Classes with Cloughjordan Circus Club are ongoing, they take place in St Kierans Hall, Cloughjordan and new members are always welcome!

Do you have stories or memories in your family about when the circus came to Cloughjordan? If so we would love to hear from you.

We use cookies to ensure that we give you the best experience on our website. If you continue to use this site we will assume that you are happy with it.
By clicking “Accept”, you consent to the use of ALL the cookies.

But opting out of some of these cookies may have an effect on your browsing experience.
Necessary Always Enabled

Any cookies that may not be particularly necessary for the website to function and is used specifically to collect user personal data via analytics, ads, other embedded contents are termed as non-necessary cookies. It is mandatory to procure user consent prior to running these cookies on your website.